Eggs are a huge part of a balanced diet, and also a key ingredient in soft, fluffy, delicious pancakes. Contrary to what you may think living a plant-based lifestyle has never been easier than it is nowadays. Even though eggs are clearly not vegan, there is actually a plant-based option so vegans do not have to limit their food choices or sacrifice their craving for pancakes.

It has been shown that a vegan diet can have major health benefits for both your body and the world. What you need to be confident about is that it is totally possible to get the egg-like consistency of a regular egg without giving up taste. So whether you are a vegan or just ran out of eggs but want pancakes for breakfast, you can now satisfy your taste buds thanks to the different vegan egg substitutes we’ve shared below.

Why are eggs used in pancakes?

What are common vegan substitutes for eggs?

Using apple sauce is a fat-free way to replace eggs in baked goods. Use ¼ cup of unsweetened apple sauce to replace one egg. As well as reducing calories, this vegan egg replacer adds moisture and flavor to cookies, cakes, muffins, and bread.

Aquafaba is the name for the viscous water in which legumes such as chickpeas have been cooked. Roughly translated from the Latin for ‘bean water’, this vegan substitute can be used in place of egg whites since the proteins and starches are structurally very similar.

Black salt, also known as kala namak, is a volcanic salt traditionally used in Asian cuisine. Due to its high sulfur content, black salt has a strong flavor that mimics the taste of eggs, making it a very popular ingredient in vegan cuisine. It works well in tofu scrambles, vegan egg salads, quiches, frittatas, and vegan French toast, although it should be used sparingly.

This nutritious seed is packed with antioxidants and can also be used as a vegan egg substitute in baking and cooking when ground. Combine a tablespoon of ground flaxseed with 3 tablespoons of water, stir to combine, and let stand for 5 minutes to thicken.

Tofu is a protein-packed vegan egg substitute, while silken tofu adds a creamy texture when used as an egg substitute in cheesecakes, ice cream, sour cream, or puddings. Firm tofu is a great option for egg-free cooking and works best in savory dishes such as eggless quiches, lasagne, vegan egg salad, or a breakfast scramble.

Tapioca starch is used as a binding or thickening agent for sauces, puddings, and condiments. Use 1 tablespoon of tapioca starch, blended with 3 teaspoons of water, to replace one egg.

High in protein, chickpea flour works as both a binding and raising agent and is one of the best natural egg replacements in baked goods such as scones, cookies, and biscotti. With a surprisingly similar texture and flavor to eggs, chickpea flour has also become a common egg substitute in omelets and quiches.

What are the best vegan substitutes for eggs in pancakes?

Is there an egg substitute powder?

Absolutely! Several options for egg substitute powders can be found in most grocery stores. Versatile, vegan, and gluten-free, they usually contain starch or flour and a raising agent and make for an excellent egg replacement when the volume is important. Egg substitute powders won’t add unwanted flavor or sweetness and can be used in cookies, muffins, cakes, and as a binding agent in vegan casseroles or vegan meatloaf.

Aquafaba powder is the dried version of the liquid remaining from cooking chickpeas. This liquid absorbs proteins and starches from the chickpeas which give it properties very similar to egg whites.

The perfect vegan egg substitute for cooking and baking. Pure and 100% plant-based! All-natural powdered chickpea broth. 7-ounce container yields 14 cups of aquafaba liquid, equivalent to about 74 eggs or 112 egg whites. Easy to use and store. Shelf-stable up to 2 years. Certified non-GMO. 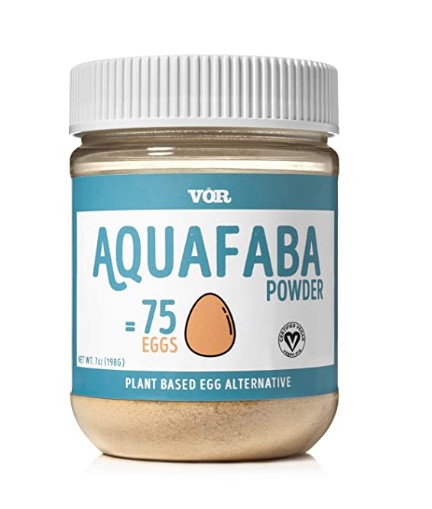 Vegg is a tasty egg substitute loved by vegans, people with egg allergies or dietary restrictions, and nutritious-conscious eaters looking to eat cleaner or reduce their cholesterol & fat intake.

Vegg Uncaged Baking Mix simulates the same function and tastes like eggs, without the eggs. It’s a healthy, plant-based egg replacement that allows you to make your favorite baked treats.

Simply mix Vegg Uncaged Bake Mix with water to create the perfect egg-free ingredient for cooking & baking. Now you can have your favorite cakes, bread, cookies, quiches, and more without using eggs. 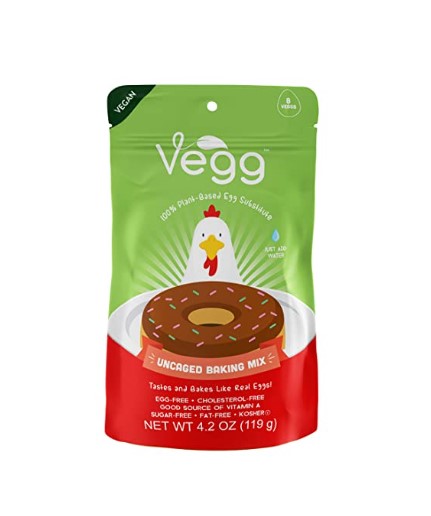 This proprietary powdered egg substitute is the perfect ingredient for egg-free baking and can be used in cakes, cookies, muffins, pancakes, quick bread, and more.

It’s super easy to use; just add water in varying amounts depending on if you are replacing an egg white, yolk, or whole egg. With each package containing the equivalent of 34 eggs. A great choice for those watching their cholesterol intake as it is cholesterol-free! 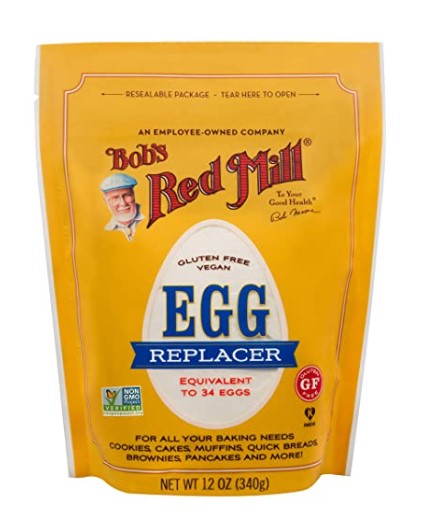 The neat egg is the perfect plant-based baking companion, used in recipes where the egg is a binder and not a stand-alone egg. Easy to mix, combine 1 tablespoon of neat egg mix with 2 tablespoons of water and mix well.

Enjoy all your favorite baking recipes such as cakes, brownies, cookies, and muffins with this healthy egg alternative. Derived from only two superfood ingredients, chia seeds, and garbanzo beans.

Creators of the neat product line are determined to please all eaters and provide a solution for special dietary restrictions. 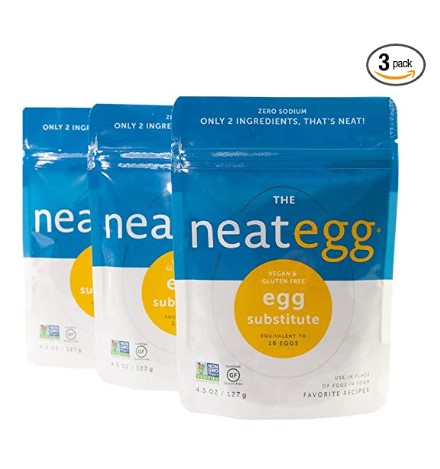 Vegan Egg Replacer for baking mimics what eggs do in recipes to bind baked food together, but it’s completely egg-free.

Ener-G Egg Replacer simplifies baking for people who cannot use eggs. Use it to replace both egg whites as well as egg yolks. It is gluten-free and made from potato starch and tapioca starch flour.

Perfect for those with food allergies or restrictions, or just watching their nutritional intake. Egg Replacer is Vegan, Gluten-Free, No Preservatives, Non-GMO, and Kosher certified. One 16 oz package is equal to 100 eggs.

JUST Egg made from plants

Made entirely from plants, JUST Egg is free of cholesterol and uses less water and carbon emissions than conventional eggs. Delicious, healthier, and more sustainable. It’s a better egg, for you and the planet.

JUST Egg is for plant-eaters and meat-eaters. Fluffy and filling, JUST Egg is more than the vegan egg replacer, egg substitute for baking, or scrambled egg mix you’ve tried before.